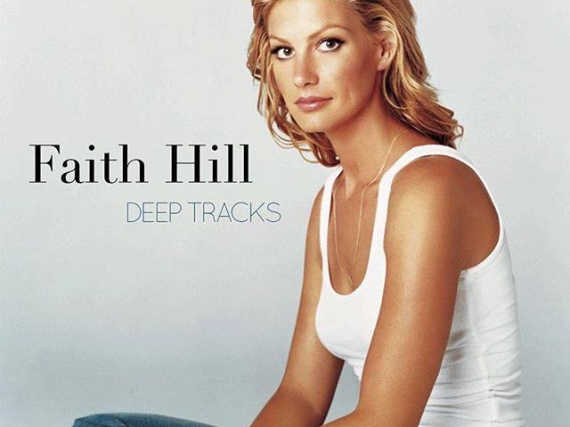 Twenty-three years after releasing her triple-platinum-selling debut album Take Me As I Am, Faith Hill will issue her final LP for Nashville's Warner Bros. label. Deep Tracks, out November 18th, will compile several cuts from the pop-country superstar's previous releases. The set will focus on some of Hill's favorite non-singles including the Bruce Springsteen-penned "If I Should Fall Behind," from the Grammy-winning crossover album, Breathe. Three previously unreleased tracks are also featured on the LP.

Of the new tracks, Hill chose the inspirational Chris Rice-penned "Come to Jesus" as a gift for her mother, "who has wanted me to record a gospel album for years." She also notes that the tune is very personal for her family. "I recorded this song during the last couple of weeks that [her father-in-law] Tug McGraw battled with brain cancer," she said in a release. "Tim played him my rough cut and Tug listened to it multiple times a day until his passing." The song was also recently included on Love Remains, the gospel LP from Lady Antebellum's Hillary Scott and her family.

"Boy" was one of the last tracks Hill cut for the label and the third unreleased cut, "Why," is a long-time favorite of husband Tim McGraw. "It was and sadly still is today an important message."

Last month, Hill and McGraw surprised fans with a performance at Nashville's historic Ryman Auditorium, during which the couple announced Soul2Soul The World Tour 2017, which kicks off in New Orleans on April 7th, 2017. The 65-city tour celebrates the 10th anniversary of the record-breaking Soul2Soul II tour, the highest-grossing multi-year country music tour of all time. It will mark the first time Hill has toured since 2007.