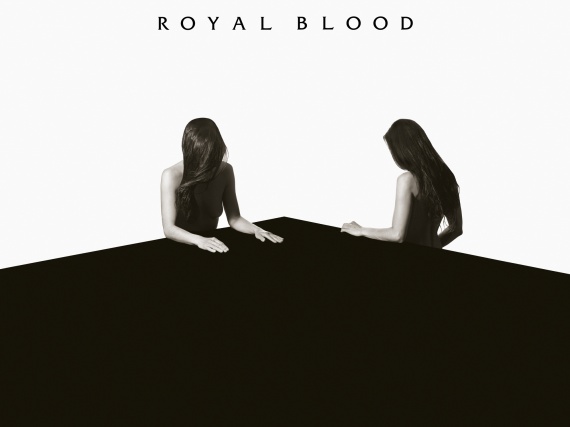 Royal Blood
Royal Blood Offer More ‘How Did We Get So Dark?’ Album Details, Unveil ‘Lights Out’ Video
Royal Blood are on their way back with a new album and after revealing the title and release date and teasing the artwork earlier this week, the band has offered up more details on the effort.

The official artwork has been revealed (seen below), as has the 10-song track listing and the duo of Mike Kerr and Ben Thatcher just released one of the year’s more eye-catching videos for their single “Lights Out.”

The clip starts off innocently enough, with Kerr and Thatcher playing on a mat inside a white room rocking out some gritty fuzzed out guitar licks and delivering some powerful beats. But as the pace picks up, the room is not what it seems with a watery sheen appearing on the floor and eventually a group of bodies emerging from different parts of the room. The band seems to be the only thing afloat in the room, that is until the lights go out and the guys are bathed in red as they began to sink into the viscous waters below. Watch it all play out above.

Royal Blood will release their sophomore set on June 16 via Warner Bros. The duo created all ten songs in instrumental form during sessions in Brighton, Los Angeles and Nashville before rocking out the tracks to what listeners will eventually hear. This past November, the pair headed off to Brussels for six weeks where they recorded How Did We Get So Dark? with producer Joylon Thomas. They eventually finished off the album with the assistance of mixer Tom Dalgety in London.

You can view the full track listing for the album below. A press release on the disc reveals that “I Only Lie When I Love You,” “Hook, Line and Sinker,” “Look Like You Know,” “Don’t Tell” and “Where Are You Now?” are also key cuts within the album’s flow. You can pre-order the disc via the band’s website and those who pre-order the disc will receive an instant download of “Lights Out.” Look for Royal Blood hitting the road in support of the album. Dates can be found here.