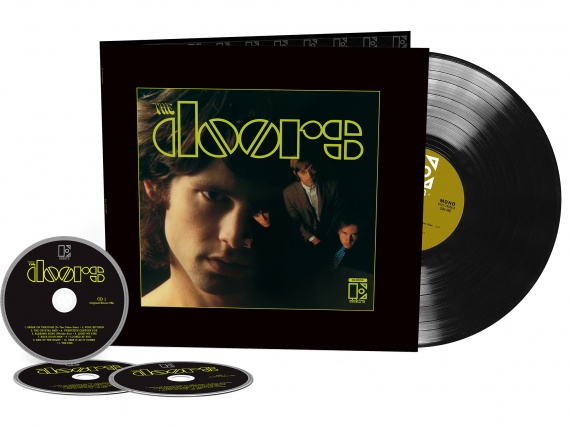 The Doors‘ self-titled debut album, which was released 50 years ago today, will mark its golden anniversary with a three-disc deluxe edition.

The Doors: 50th Anniversary Deluxe Edition will be released by Rhino on March 31 and will include remastered stereo and mono mixes of the original album plus a disc of live recordings from a concert at San Francisco’s Matrix on March 7, 1967.

The package will also include an LP version of the original album in the newly remastered mono mix. You can see the full track listing for the set below. (The Doors: 50th Anniversary Deluxe Edition will also be available digitally.)

This will be the first time the album’s original mono mix appears on CD. The album’s original stereo mix also gets an upgrade for the first time in 30 years. The eight live tracks – all originally from the debut album – appear in new forms too. The songs were first released in 2008, but the new versions come from the original tapes, which were thought to be lost. The earlier tracks were taken from a third-generation tape.

The Doors: 50th Anniversary Deluxe Edition‘s announcement comes on the Day of the Doors. Los Angeles will honor the band today with a public event at the intersection of Pacific and Windward avenues, the site of the “Venice” sign. Surviving Doors members John Densmore and Robby Krieger will be on hand at the event with members of the late Ray Manzarek‘s and Jim Morrison‘s families.