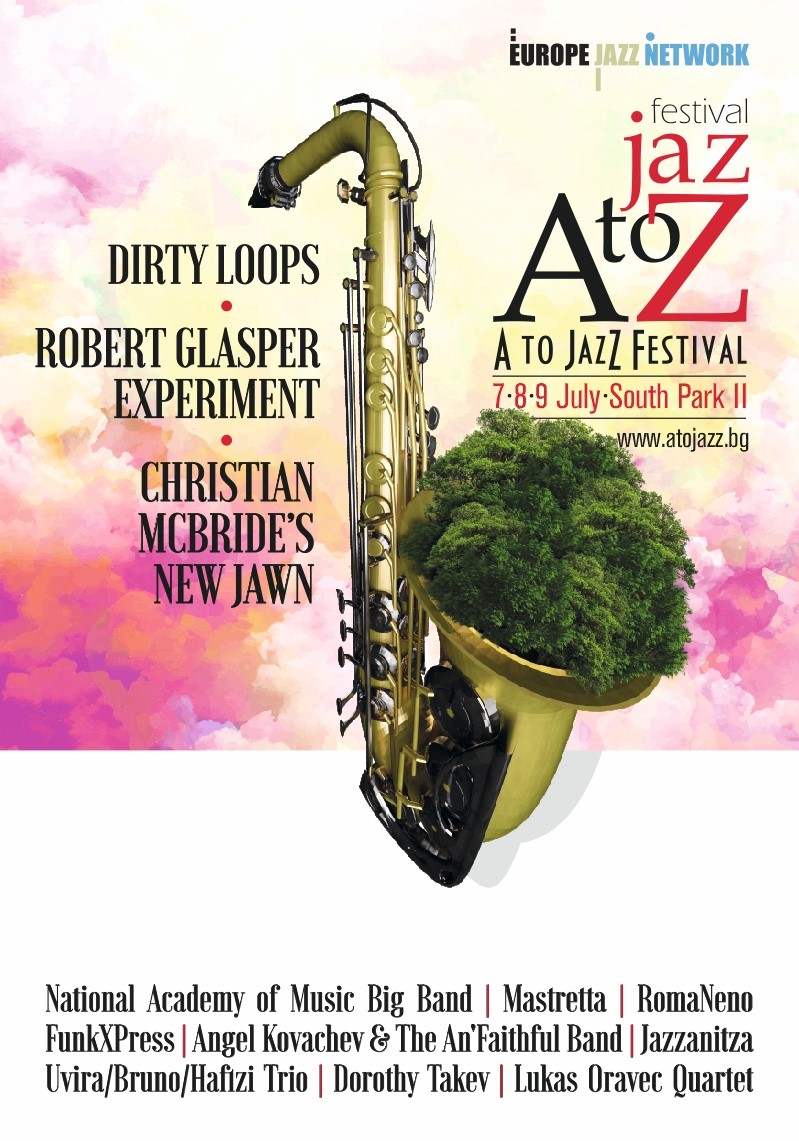 The festival will be held on 7th, 8th and 9th of July and the hedliners are
DIRTY LOOPS, ROBERT GLASPER EXPERIMENT и CHRISTIAN MCBRIDE`S NEW JAWN

One of the most loved and expected events in Bulgaria is approaching – A to Jazz Festival. This year's edition will take place on 7th , 8th and 9th of July at the well-known location in South Park 2, and the scale and performers that the audience will meet are more than dizzying. A the JazZ 2017 will be headed by DIRTY LOOPS, ROBERT GLASPER EXPERIMENT and CHRISTIAN MCBRIDE'S NEW JAWN.

"This year, we are back with an even more inspirational program featuring many world jazz artists, jam sessions, colorful art-bazaars, children's music workshops, innovations and services that will improve the quality of A to JazZ experience. I believe that this will be the largest edition we've ever done so far, so I'd be happy to share it with even more people."

The Swedish trio DIRTY LOOPS will head the stage during the first of the three festival evenings. The band is becoming a world phenomenon with the cover versions of hit songs that they take on such as "Just Dance" by Lady Gaga. It is this killer version that presents their style as a mix between funk, pop and jazz music, and attracts the interest of the giants in the industry, David Foster and Andreas Carlson. As a result, their first album "Loopified" was born and in 2015 the boys warmed up MAROON 5 during their world tour.

A JazZ 2017 will present one of the phenomena of modern jazz ROBERT GLASPER EXPERIMENT. The winner of five Grammy Awards extends his music beyond the entrenched genre boundaries, drawing inspiration from modern hip-hop and R & B music. Robert Glasper will present his new album "Art Science" along with his vibrant musicians and DJ.

The presence of CHRISTIAN MCBRIDE with his new NEW JAWN project on the third festival night is a true honor and pleasure for the organizers. The Philadelphia native bassist is one of the most requested and respected figures in the world of music today, and his incredible talent brings him four Grammy statuettes. His newest formation, CHRISTIAN MCBRIDE'S NEW JAWN, is a killer unit full with groove. Christian is always in the pocket with the passion and fury of a virtuoso that we will face shortly.

Other special guests of A to JazZ 2017 are one of the most popular Spanish fusion formations MASTRETTA, as well as the outstanding Slovak trumpeter LUKAS ORAVEC and its quartet. The JAZZANITZA project will present the harmonious union of contemporary jazz and Bulgarian folk music and ROMANENO will perform the most beautiful Roma songs with jazz arrangements. Among the other artists are ANGEL KOVACHEV, DOROTHY TAKEV, and the young funk band from Salzburg FUNKXPRESS, the Bulgarian-Dutch UVIRA / BRUNO / HAFISI TRIO and the big band of the Music Academy in Sofia with conductor Mihail Yosifov will their debuts on a big stage.

The festival is organized with the support of the America for Bulgaria Foundation, the Ministry of Culture, the Embassies of the Kingdom of Spain and the Slovak Republic and is part of the Cultural Events Calendar of Sofia Municipality. His honorary patron is Mr. Elen Gerdjikov - chairman of the Sofia Municipal Council. More information, details and news around the festival are available at www.atojazz.bg and the festival's Facebook page.