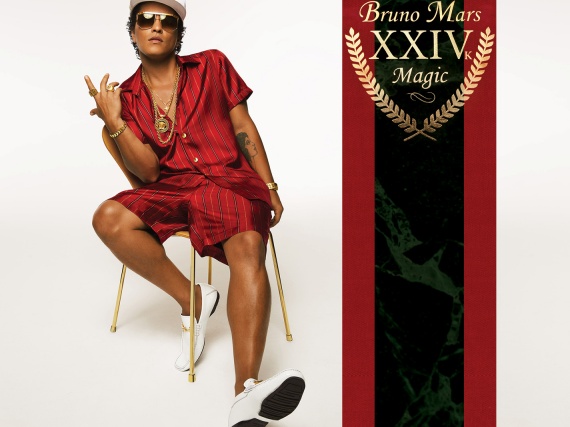 Bruno Mars is officially back with 24K Magic, his first album since 2012's Unorthodox Jukebox. The nine-track project includes two previously-released singles, "24K Magic" and "Versace on the Floor." The former topped out at No. 5 on the Billboard Hot 100. He also performed the song "Chunky" during his appearance on Saturday Night Live back in October, a well-reviewed performance that helped build anticipation for the album.

While the project has no official features, Halle Berry does show up as a special guest on "Calling All My Lovelies." Contributors to 24K Magic include Babyface, T-Pain, Emile Haynie, and James Fauntleroy, the latter of which impressively worked on all nine songs.

The Stereotypes, comprised of Ray Romulus, Jonathan Yip, Jeremy Reeves, and Ray Charles McCullough II, also worked their magic on the production side for four of the records ("24K Magic," "Chunky," "That's What I Like," "Finesse").

Although Mars hasn't been releasing much music over the past few years, he had a major blip with the success of "Uptown Funk." While the song was a smash, the success didn't exactly let Bruno take the pressure off. "Coming off the biggest song of my career, it was super-daunting to come in [the studio]," he said in an interview with Rolling Stone. "I don't know if people are going to love this shit... I don't know if radio is going to play it. But what I don't want to have happen is I put it out and say, 'Damn it, if I'd just done this and this, maybe it would have had a shot.'"

Mars will be supporting the album with his upcoming 24K Magic World Tour, which kicks off in March of 2017 and lasts eight months. He'll play 85 dates throughout Europe and North America to promote 24K Magic. You can check out all the dates and ticket information here.

He's also set to perform at the American Music Awards this Sunday. Before that, he'll also appear on this Sunday's installment of 60 Minutes, where he'll take Laura Logan to several important locations from his childhood in Hawaii.